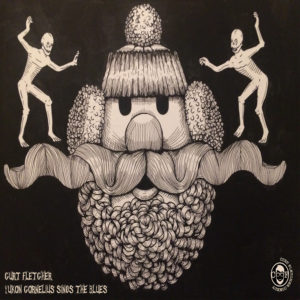 My debut comedy album, “Yukon Cornelius Sings the Blues,” has been released! I recorded last year in Albuquerque, New Mexico, at the Barelas Event Center. Thanks to everyone who had any part of making this album! Special thanks to Jacob Breckenridge for the cover art, and Scotty Goff for inspiration for the album title. And, of course, Allen Clark, for recording! And Jon Patterson for the logo! It is available on several digital platforms, I will link some up here, and it’s also on Spotify, just search for “Yukon Cornelius Sings the Blues” and you’ll be able to find it. 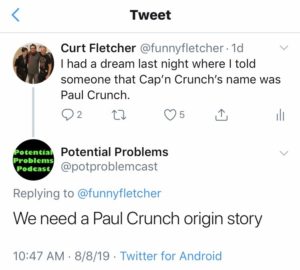 I had to do a great deal of research on Microfiche to find out any details of the origin of Paul “Cap’n” Crunch, but what I found did not disappoint.

Born, Paul Ulysses Cranch, in England on April 27, 1751, to Cornelius and Bessie Cranch, Paul always wanted to follow in his father’s footsteps as a swashbuckler. Cornelius was a well-known swashbuckler at the time. Bessie was a cloth-spinner, she spun wool and linen.

Cornelius died a hero in the Great Breakfast War of 1767. When Paul joined the English Navy, he decided to change his last name legally to “Crunch,” so he wouldn’t get treated differently because of his relation to Cornelius Cranch.

In the Revolutionary War, Crunch had worked his way up to Lieutenant. His ship was taken over, as he acted as “Captain” to try to save his own Captain, but is taken as a prisoner by the United States Navy. Crunch was taken to the United States where he met, Lola Berry, a secret solider from Massachusetts. Berry disguised herself as a man, using the name, Herschel Christ, so she could join the military, which didn’t allow females in at the time. Lola couldn’t help but fall in love with Paul’s charm and big smile, and she helps him break free, fast. The couple marries just six months later. The Crunch-Berry wedding was a big hit. They milked their friends and family for lots of gifts and money.  Nine months later, they welcomed their first daughter, Maritime Crunch, to the family. Paul and Lola went on to have two more children later in their marriage.

Paul’s eldest daughter, Maritime Crunch, was married to Charles Nestle, who’s family owned a chocolate factory. At the Nestle-Crunch wedding, Paul caused a big scene, which eventually led to he and Lola’s divorce. Lola didn’t allow Paul to see his youngest children, so he shaved off his mustache and disguised himself as a nanny so he could see his children. He always said, “Breakfast was the most important meal of the day,” and he created what we now know as cereal. He fed his kids, what he called, “Cap’n Crunch” every morning before school.

Tim Gaither and I recorded another episode of his podcast while he was in Tulsa recently. Give it a listen! If you don’t like it, stop listening.

My comedy album, “Yukon Cornelius Sings the Blues,” will be released on August 23, 2019! You’ll be able to grab a copy on several digital platforms, including Apple Music and Amazon Music.

Thanks to everyone who helped in any way make this possible! The recording was a lot of fun, it was a small crowd in Albuquerque, with a bunch of friends there! Jacob Breckenridge did the album cover art as well and did a great job!